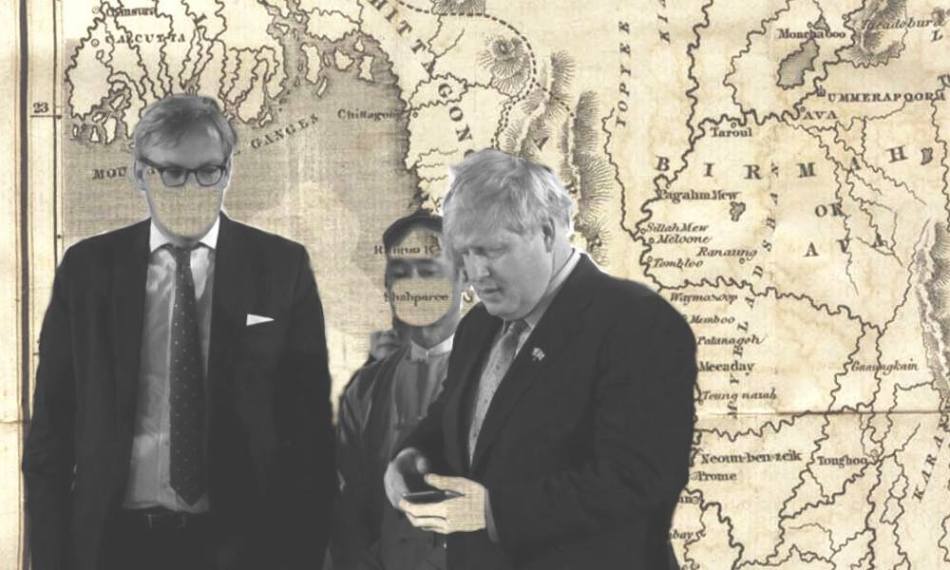 In recent news, footage has been released showing UK Foreign Secretary Boris Johnson reciting part of Rudyard Kipling’s poem ‘Mandalay’ (1892) whilst he was touring the Shwedagon Pagoda during an official visit to Myanmar in January 2017. Andrew Patrick, the British Ambassador to Burma, hastily informs Johnson that this reference to offensive colonial poetry is ‘not appropriate’. After all, ‘Mandalay’ was written about the former colony of Burma, which Britain had oppressively ruled between 1886 and 1948. The discriminatory nature of this colonial regime is notoriously exposed in George Orwell’s Burmese Days (1934). Moreover, it was during the aftermath of the violent Third Anglo-Burmese War – which had ended in the ruthless systematic destruction of northern Burmese villages – that Kipling had visited the colony. It is therefore unsurprising that Johnson’s recital of ‘the temple bells they say, come you back you English soldier’, quickly incited public outrage.

No doubt, the reaction to this incident is part of a wider backlash against a long list of inappropriate comments that Johnson has made in recent years, including his use of the racial slur ‘piccaninnies’ to describe black people in 2002, as well as his more recent suggestion that the Libyan city of Sirte could be a new Dubai if the Libyans would simply ‘clear the dead bodies away’. This raises serious questions over whether he should remain Foreign Secretary, but this article does not intend to focus on the politics surrounding Johnson. Rather, if we take Johnson out of the picture, the public’s immediate reaction to this reference to Kipling raises wider issues concerning the way that we should treat literature that we deem politically incorrect and offensive today.

The general response to the recital of ‘Mandalay’ has been one of disapproval. But is this popular branding of Kipling as a racist and imperialist fair, or is it in fact too simplistic? Boris Johnson is criticised for reciting lines from poetry that he does not understand, but can we only truly ‘understand’ Kipling through discrediting his work? Perhaps we need look no further than ‘The White Man’s Burden’ (1899): a notoriously jingoistic poem that calls upon the white men of the United States to accept their moral responsibility as a racially superior nation to civilise the people of the Philippines. For Kipling, the natives are a homogenised mass of ‘silent, sullen’ figures, who are characterised as ‘half-devil and half-child’. As the critic Peter Keating has stated, ‘there can be no doubt that the poem is profoundly racist in sentiment’.

Can the same be said of ‘Mandalay’? This poem, written in a crude parody of working class dialect, shows the glorified landscape of Burma calling for a British soldier to return to his Burmese mistress. In a recent opinion piece published by The Guardian, Ian Jack has suggested that we should ‘cut [Boris] some slack’ as the poem is not ‘pro-colonial’. However, it is naïve to equate the lack of explicit jingoism in ‘Mandalay’ with the absence of a pro-colonial slant. Fundamentally, if we look past the embellished imagery of Burma, Kipling aids the imperial enterprise by encouraging British soldiers to return to the colony. The poem plays upon a soldier’s feeling of obligation to continue his imperial duty, which was a duty that ultimately manifested itself in the continued social oppression, economic exploitation and violent policing of the Burmese population. In this way, Kipling legitimises the violence of the Anglo-Burmese wars. ‘Mandalay’ is therefore a sophisticated example of colonial propaganda that aided recruitment into the colonial service by ingeniously evoking a sense of longing for a romantic and exotic Orient.

Although the expression of racial prejudice is more implicit in ‘Mandalay’, it nonetheless resonates throughout the poem. Kipling’s romanticised Burmese environment and exoticisation of indigenous women contributes to what Edward Said has labelled Orientalism: the discourse which offered a justification for European colonialism based on ideas of racial difference. Kipling always portrays Burma as place of ‘otherness’, which can be seen in his disparaging depiction of Buddhism as the worship of a ‘Bloomin’ idol made o’ mud’. Moreover, Kipling only glorifies the colony as a ‘cleaner, greener land’ with ‘neater, sweeter’ women in comparison to the ‘gritty pavin’-stones’ of urban London where working class women are ‘Beefy face an’ grubby’. It is Kipling’s classist sentiment here that is profound. Does ‘Mandalay’ elevate the status of Burma and its non-white population by expressing a genuine fondness for the colony? Or is Kipling making a derogatory comparison between a non-white population and the British working class, in order to deride the latter?

It is worth noting that we cannot expect Kipling to have challenged the hegemonic colonial discourse of his time. The nineteenth century saw an increased intellectual focus on rationality. Accordingly, scientific evidence was held in increasingly high esteem. White supremacy was presented and taught as scientific fact: it had been ‘proved’ through the pseudo-sciences of phrenology, social Darwinism and eugenics, for instance, that non-white races were physically, morally and intellectually inferior. For the Victorian population, these theories on race justified the European colonial enterprise; many people genuinely believed that the West had a moral responsibility to ‘civilise’ the ‘savages’.

Nevertheless, we can recognise many anti-imperial strands of thought in Kipling’s work. The poem ‘Recessional’ (1897) emphasises the ephemerality of Empire and explicitly challenges the legitimacy of patriotism by referring to it as ‘pomp’, and a ‘frantic boast and foolish word’. In ‘The Widow at Windsor’ (1892), Kipling exposes the adversity that the imperial soldiers faced and, through the voice of a British working class male, expresses disillusionment with the Empire through disparaging the British flag. Challenges to racial preconceptions are also evident in Kipling’s novel Kim (1900), with critic Abdul R. JanMohamed recognising that, although Kim reveals an underlying ‘problem of racial difference’, it also contains ‘a positive, detailed, and non stereotypic portrait of the colonised that is unique in colonialist literature’. Thus, when it comes to looking at Kipling’s presentation of race and imperialism, there is significant inconsistency and complexity.

We therefore cannot simply dismiss Kipling as a bigoted colonialist, particularly when we consider this popular demonisation of Kipling in relation to our ‘forgetfulness’ of the prejudices of other historical figures and authors. Take the revered image of Mahatma Gandhi for instance, who we remember as the pacifist leader of the Indian nationalist movement who extended the political sphere to the oppressed sections of Indian civil society. In our celebration of Gandhi’s achievements, we look past his condescending view of African people, who he derogatorily referred to as ‘Kaffirs’ in his demand that they be racially segregated from Indians in South Africa. If we excuse Gandhi as a product of the colonial era, should we not excuse Kipling also? And what about racism in Dickens; anti-Semitism in the poetry of Chaucer, Eliot and Pound; and misogyny in Shakespeare, Milton and Orwell? Does Roald Dahl’s anti-Semitism change the way we view his children’s literature? And how do we treat the work of William Golding in light of the knowledge that he once attempted to rape a 15-year-old schoolgirl?

My point is this: it is hypocritical to simply brand Kipling as a racist imperialist when we continue to hold other prejudiced authors and historical figures in such high esteem. Certainly, we are correct to criticise Kipling’s colonial stance and the racist ideology that resonates throughout his work. However, there should then be more discussion in the media about the prejudices of historical figures and authors who we continue to venerate. Just as we understand why it was offensive for the Foreign Secretary of a former colonial power to quote Kipling in a former colony, we should instantly recognise why it was inappropriate for the President of India to erect a statue of Gandhi at the University of Ghana last year, and so forth. Nevertheless, it would be ignorant to dismiss the value of Kipling’s literature entirely, such as by removing him from school curriculums. Whilst we cannot defend the blatant racism in ‘The White Man’s Burden’, this does not mean that we should not find value in other examples of Kipling’s work, such as in ‘Mandalay’. This poem displays Kipling’s aesthetic value and his vivid written imagery. To understand Kipling and other controversial figures, therefore, we must explicitly recognise the difficulties and ambiguities that their literature poses. Kipling’s writing constitutes an important part of British literary history and our colonial past, which we cannot forget or hide.

Blair, E. A., ‘How a Nation is Exploited – The British Empire in Burma’, 1929, http://www.orwellfoundation.com/the-orwell-prize/orwell/essays-and-other-works/how-a-nation-is-exploited-the-british-empire-in-burma/ ; accessed 13 October 2017.

0 comments on “Boris Johnson and Rudyard Kipling’s ‘Mandalay’: How should we remember prejudiced authors and their literature?”