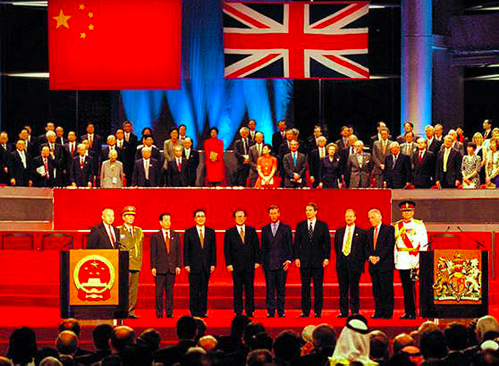 In the summer of 1997, a ceremony was held in Hong Kong, marking the official transfer of sovereignty to the People’s Republic of China, ending 157 years of British rule.

Chris Patten, Hong Kong’s last colonial governor, departed from the Government House in Hong Kong on the 1st July 1997, and made the historic and iconic trip back to the HMY Britannia. Patten had been held in high esteem and he began his departure speech, ‘Today is a day of celebration, not sorrow’, concluding that Britain’s relationship with its former and friendly colony would not have a sour undertone.

Britain had acquired Hong Kong Island from China almost by accident. In the 18th and 19th Century, China had sealed itself off from the world, allowing limited trade under the Canton System, ensuring that Canton was the only port which operated trade in China. In 1841, China had obstructed British merchants at Canton, confiscating their opium stocks which were being brought over from India. Palmerston, the British Foreign Secretary, who was an advocate of free trade, dispatched a British force under Admiral George Elliot to the Orient. The initial instruction was to gain an apology and compensation from the Emperor of the Qing Dynasty. During a series of ‘gunboat diplomacy’ where the British Royal Navy showed its strength in Chinese waters, and the first Opium War (1839-42), Henry Pottinger won over the city of Chusan, in Zhejiang Province. Chusan was thus later exchanged for the island of Hong Kong. Ironically, although it seemed that Palmerston had achieved an open trade route to China, when he found out, seven months later, Pottinger was dismissed, and British traders and merchants had taken settlement and seeded their economic roots in Hong Kong.

Thus in 1842, with the signing of the treaty of Nanking at the end of the first Opium War (1839-42). Hong Kong was ceded as a crown colony from the Qing Empire. However, incomplete control over the Hong Kong harbour was an unsatisfactory trade for Britain, and they demanded that China cede Kowloon Peninsula after the second Opium War (1856-60). Britain’s hold on the island and its surrounding territory grew in 1898, as the New Territories of Hong Kong, together with 235 islands, were leased to Britain for 99 years, from July 1st, 1898.

Although China wanted to take back Hong Kong before the lease was over, the Kuomintang (The Chinese Nationalist Party) and the Communist Party (Led by Mao Zedong) had their own home territory issues during the 20th century. Britain regained control after the Second WorldWar, after the Japanese had occupied it for three years and eight months. Hong Kong’s shifting demographics became significant during the upheaval in China following the Communist succession in 1949, where it became a haven for thousands of Chinese refugees escaping Communist rule. Throughout the 70s, the murmur of independence developed in Hong Kong, however, much of the Hong Kong population, many of whom were economic, political or war refugees from the Chinese Civil War and the Communist regime in mainland China, wished to sustain the ‘status quo’.

Sino-British relations deteriorated from 1992 until the handover, due to the appointment of Chris Patten. Patten instigated a series of reforms which were designed to give the people of Hong Kong a greater voice on the political platform through the Legislative Council – LegCo. Beijing attempted to obstruct Patten’s reforms, and attempted to curb the student-led democracy movement in 1989. Echoes of the recent Umbrella Revolution in Hong Kong in 2014? China saw Patten’s reforms as a betrayal of Britain’s promises to manage the transition as an exercise in which Hong Kong has no voice of its own.

The ceremony in the summer of 1997 ended the accumulation of a thirteen-year deal, which had been initiated by the Sino-British Joint Declaration of the Question of Hong Kong, in December 1984. This agreement specified that Hong Kong would have a high level of autonomy, apart from in matters of foreign relations and defence. Following the departure of Chris Patten from the Government House, five-hundred People’s Liberation Army vehicles crossed the Chinese-Hong Kong border, replacing any British troops that were still on the island. The troops were deployed as garrison forces symbolizing the reassertion of China’s sovereignty. President Jiang, the first mainland Chinese head of state to visit Hong Kong since 1842, reassured Hong Kong residents that China would carry out the “one country, two systems” plan of local autonomy. China received huge amounts of criticism and was put under international scepticism with their pledge to stay true to their saying ‘One Country. Two Systems’.

Just before midnight on the 30th June 1997, the British national flag and the Hong Kong colonial national flag, were lowered slowly down with the hum of ‘God Save the Queen’ in the background, symbolising the end of British colonial rule in Hong Kong.

Like Loading…
← Film Review: Viking
→ Boris Johnson and Rudyard Kipling’s ‘Mandalay’: How should we remember prejudiced authors and their literature?