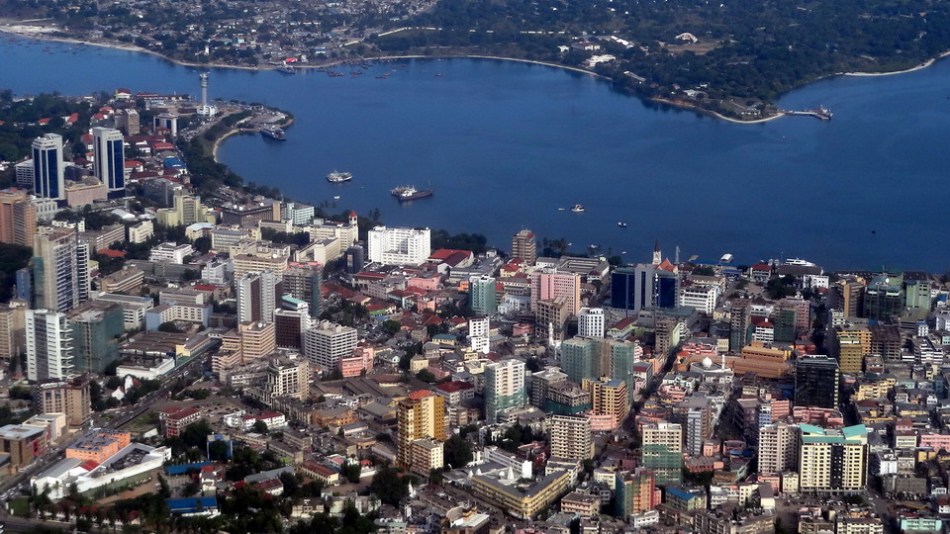 Although the 1970s have been somewhat overlooked in the historiography of Tanzania, the second decade of independence in fact constituted an important era of nation-building and identity formation. For post-independence Tanzania, the 1970s was a turbulent decade defined by mass rural-urban migration; the height of ujamaa; forced villagisation; the 1973 oil crisis; the relocation of the capital from Dar es Salaam to Dodoma in 1974; drought and famine; and the 1978-79 war with Uganda. On 9 October, as part of the Centre for the Study of Modern and Contemporary History lecture series on ‘Space’, Dr Emily Brownell presented her research on the urban environment of 1970s Dar es Salaam. In this talk, titled ‘Concrete and Bricks: Materialising the Future in 1970s Tanzania’, Brownell proposed that an examination of urban building practices offers an insightful framework through which to discuss the tensions of nation-building in post-independence Tanzania.

From a distance, 1970s Dar es Salaam appeared to be a place of privilege. For many Tanzanians living on the rural peripheries, Dar es Salaam was an alluring and rich metropolitan centre. The hundreds of rural migrants who poured into the city to escape the rural development schemes, however, soon discovered that it was also a place of disadvantage, disparity, and urban poverty. Despite the influx of people into the city, money continued to be channelled almost exclusively into rural areas. After all, the state was explicitly anti-urban in its stance: ideologically speaking, ujamaa and urbanity were incompatible. As the city became more densely populated, therefore, its inhabitants found themselves struggling to survive. The slums expanded in size, many residents were forced to work several jobs to earn a living, and the growing urban poor found themselves desperately queuing for basic goods.

Against this backdrop, Brownell’s research explores urban life in 1970s Dar es Salaam by looking at the use of different building materials in the city’s architecture. Building materials, Brownell explained, were ascribed different statuses in Tanzanian culture according a modernity/tradition binary. Modern materials, such as concrete and bricks, were characterised by the quality of permanency. Traditional materials such as mud, wattle, and palm leaves, on the other hand, were defined by their impermanency (although they could in fact survive for decades). This distinction had its roots in the colonial era, when the racial segregation of housing was visually reinforced by the use of different building materials. Whilst Europeans and Asians had access to permanent building materials, Africans did not. In fact, the colonial authorities only granted liberal building regulations for African landlords on the premise that they used impermanent building materials, so that the poorly planned and overcrowded African settlements could be cheaply destroyed in the future.

Throughout the 1960s and 1970s, TANU’s rhetoric on housing echoed colonial ideas about permanent and impermanent building materials, as well as the European belief that permanent materials possessed ‘civilising’ properties. The African elite built their own permanent residencies during the 1960s, and concrete and brick came to be understood as cultural symbols of modernity and development. Throughout the 1960s, the majority of Africans in Dar es Salaam continued to build using impermanent materials, however, and for Julius Nyerere this appeared as a visual reminder of the inequality that colonialism had produced. In an attempt to eradicate urban disparity, Nyerere envisioned that all the slums would be replaced by concrete houses. Although this proved financially impossible, Nyerere nevertheless persisted with adult education schemes which oversaw the publication of pamphlets that informed residents of the best building techniques and advised them not to live in poorly built houses, which would lead to their ill health. This housing campaign included slogans such as ‘Aluminium yes! Makuti no!’.

Nyerere’s development plans, which included a new airport and a hydro-electric plant, demanded large quantities of cement. To overcome the expense of importing cement, TANU built the Wazo Hill Cement Plant, which was located just outside of Dar es Salaam, where a 25-year supply of materials was available. Nyerere sought self-sufficiency for Tanzania’s development, and hence the plant relied on a local labour force and proudly branded its cement products with the location ‘Dar es Salaam’. Various issues soon arose, however, given the lack of local expertise. For example, following the oil crisis, outages and stoppages became increasingly frequent and the African workforce became concerned that spirits were meddling with the machinery. In light of this, politicians concurred that a witch doctor should be brought in. To rid the plant of its bad spirits, the witch doctor performed a sacrifice, smearing the blood of an ox over the different machines. According to the account of the Yugoslavian worker, the ritual was immediately effective. The plant did not continue to run smoothly, however, and newspapers even began to spread rumours that expatriate workers had abandoned the plant or were trying to sabotage it. Despite the plant’s nationalisation in 1974, productivity failed to improve.

Given the problems of production, cement did not become as widely available as Nyerere had hoped. A black market for cement developed, but even for those families who could afford to buy cement, it could take years to obtain a large enough quantity for the building of an entire house. In this way, cement continued to be recognised as a symbol of privilege and was only available to the elite. By 1977, Nyerere had become disillusioned with the idea that cement was the solution to Tanzania’s problems. Reversing his stance on cement, Nyerere shamed people for using the material, accusing them of having an ‘unhealthy addiction to European soil’. In line with his belief that ‘third world’ countries should not simply adopt ‘first world’ technologies, Nyerere urged Tanzanians to end their reliance on foreign goods.

TANU began to search for a local alternative to cement, funding new research projects such as the building research unit at the University of Dar es Salaam and the inaugurate ‘build a better home’ campaign. Soon, a new ‘vernacular’ Tanzanian alternative was discovered: the burnt brick. With a brick factory under construction, TANU portrayed the burnt brick as the building block to a socialist utopia. For Tanzania, the brick seemed to offer an ideal solution to the cement problem, as it was a permanent and reputably ‘scientific’ material yet its production required little expertise. Using the brick, communities could become self-sufficient, building permanent residencies without relying on foreign products. Despite TANU’s excitement about the burnt brick, however, Brownell explained that the brick-building project was not a complete success. Cement continued to hold its cultural status, and brick manufacture had detrimental impacts on the environment, with the production of 25,000 bricks requiring the felling of approximately 70 trees.

By examining the urban landscape of Dar es Salaam at a material level, therefore, Brownell’s research highlights the important relationship between building materials and the struggle for national identity in 1970s Tanzania. TANU’s official discourse on permanent building materials reveals the persistence of colonial ideologies. The architecture of the city of Dar es Salaam is a visual reflection of the tension between modernity and tradition that is central to 1970s nationalist discourse. The construction of permanent housing alongside the impermanent slums is testament to urban inequality. The transition away from cement is a reminder of the contradictions in Nyerere’s nationalist rhetoric. Furthermore, the continued use of cement alongside burnt bricks is indicative of the reluctance of some Tanzanians to abandon their belief in the superiority of foreign technology, reminding us that the residents of Dar es Salaam did not share a single united vision of Tanzanian modernity.